Simone Martin inherited the title ‘Countess of St. Lo’ when she was twenty-five in a secret endowment from her Great Aunt Ines who stipulated total secrecy in order to keep Simone safe from her seriously mentally ill family.

So far Simone and her eccentric staff have foiled an attempted murder, theft, sabotage of their orchards, incursions by the mob, battles in the Papal courts to defend Simone’s right to the title, and retrieved the estate’s beloved deaf gardener from a kidnapping.

With all the hullabaloo, Simone decided that the best way to live was to be joyful and not let the bastards get you down. She’d even had a Coat-of-Arms drawn up for St. Lo with the motto, “gaudium vindictae”, or “joy is revenge”, etched underneath.

On top of the jealousy fueled ravages her family has tried to perpetrate, her burgeoning friendship with one of France’s most feared mob bosses, Auguste Villaplane, has begun to draw unwanted attention.

When the ‘old groaner’, the ancient apple cider press at the estate gives up the ghost and Garnier Segal, the estate’s vintner, and Timms, the deaf gardener, arrive at the docks in Cherbourg to oversee the unloading of the new press, Timms keen sense of vibration alerts him to movement in one of the nearby containers.

When it’s opened by the dock crew, a gaggle of half-dead, and in some cases, fully dead, humans are discovered. When Timms cannot be consoled over their uncertain futures, his own experience of kidnap trauma driving him onwards, Simone leaps into action to help the refugees.

Once again, Auguste Villaplane, an official suspect who denies all involvement in the human trafficking ring, will come to their aid. Rumors still swirl about Simone’s grandfather Hubert’s supposed murder, and between that and the pressure Simone recieves to cut all ties with Auguste, she’s in for a very full year of rescue, choices and investigation. 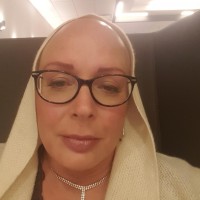 F.E. Arliss has visited over 36 countries and continues to be inspired by different cultures as she writes her novels. Her books frequently hit the top 100 best-seller lists on Amazon in Science Fiction; Literary Fiction; and Paranormal for Teens and Adults.